Supported by the Department of Comparative Literature of the University of Hong Kong, 城邦/Chéngbāng/Polis was held by undergraduate students on May 31, 2013 as a symposium on the creative arts in Hong Kong. The symposium was divided into a total of three panel sessions with different art-related themes, as well as two plenary speaker sessions at the middle. Throughout the day, each speaker gave their distinctive personal insight regarding art and culture in various perspectives which made the event fruitful.

The very first panel session was started by Serene Chan on the topic of postcolonialism. In her presentation, two Cantonese pop-songs “Wedding Card Street” (囍帖街) and “Pig Cage Market” (豬籠墟事變) were chosen as examples to illustrate the theme.

Both selected songs portray the distinctive local characteristics of certain traditional places in Hong Kong. “Wedding Card Street” packages the redevelopment of Lee Tung Street, known as Wedding Card Street, as a love story about letting a past lover go. The distinctive features of that street are presented throughout the song by the recurred, surreal, as well as realistic images in the lyrics. For “Pig Cage Market”, it presents the characteristics of wet markets in Hong Kong by an array of visual, olfactory, tactile and audio images throughout the lyrics, and simultaneously puts forward the theme of the gradual elimination of wet markets in Hong Kong due to the rise of supermarkets.

By presenting the two songs, Chan pointed out the concepts of embedded coloniality and neo-colonizing forces. Through musicality, the resistance towards embedded coloniality is conveyed. When she was asked of how the change of city helps people understand art and culture in Hong Kong, Chan commented that cultural products such as songs and films are useful to comprehend people’s reactions towards post-colonial changes, as well as the identity and mentality embedded in the space. 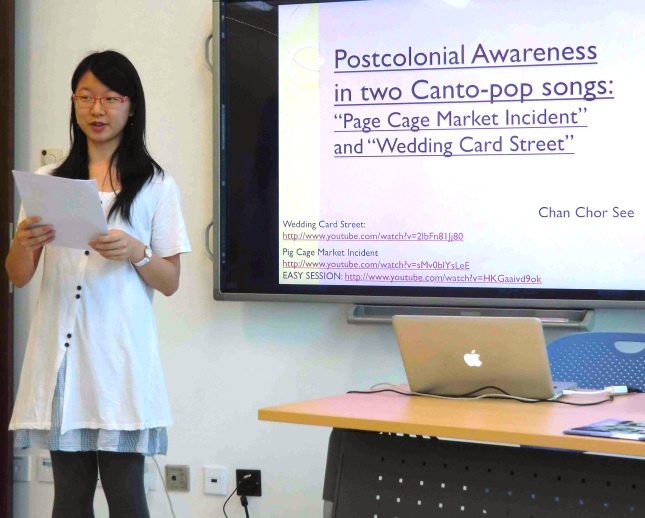 Julianne Yang – Within and without: Urban Strangers in Andersson’s You, the Living, and “Citylines” 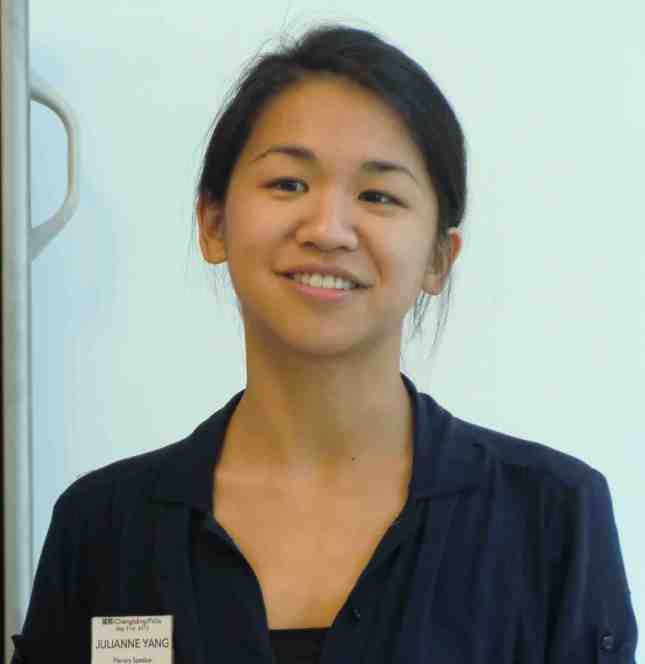 Julianne Yang was invited as the first plenary speaker of the Symposium to give a sharing on the topic of urban strangers. Her presentation consisted of two components: 2007 Swedish film You, the Living (Du levande) and the creative project “Citylines” which was done by herself.

Directed by Roy Andersson, the film Du levande has the theme of strangerhood. It was shot in a distinguished style since wide angle long shoot was adopted without the moving of camera to place people in their social context (their “space”). Plus, there are minimal dialogues in the film for the purpose of striking audience emotions and reinforcing the theme that life is full of vulnerable human beings and strangers.

Regarding the creative project “Citylines” done by Yang, it is a combination of an array of blind drawings of strangers in public places like transports, book shops, streets and restaurants. Yang believes that art is a way of recognizing different stories from different people in society. When she was asked of the findings of typical Hong Kong people from her project, she noted that their main characteristics are distraction and tireness.

Julianne Yang introduces a drawing part of her project “Citylines”

In the presentation, Valencia Tong shared a series of artworks which are in fact the materialization of her observations in daily life. Her works showed a style of contrast between their theme and their way of presentation. In most of her works, colorful and vibrant demonstrations are adopted to illustrate a negative and dark theme. Such method of artwork presentation became the distinctive feature of her works.

According to her observation, Hong Kong may be a cultural desert as usually suggested by others. The education of Hong Kong, for instance, reflects a sense of standardization like “the weird rules” in secondary schools. Tong perceived it as a loss of individuality and diversity of students. Chaos, conflicts and even violence may arise consequently. 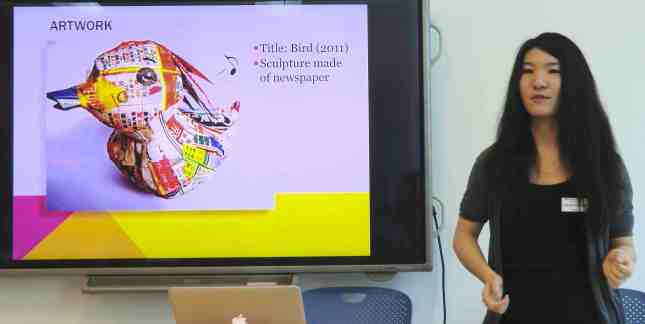 Bird (2011) shows an apparently innocent bird, made of the real estate section of different newspapers. She aims to emphasize on the price soaring that afflicts Hong Kong citizens

Elaine Wong- The Spectatorship of Arts in Hong Kong

In her presentation, Elaine Wong discussed two well-known art sculptures exhibited in Hong Kong—Hoffman’s Rubber Duck and McCathy’s Complex Pile—to illustrate the spectatorship of art in Hong Kong. In general, the former one is deemed as lovely and favorable while the latter one is perceived as controversial and resistant.

The critical theories of aesthetics, created by Jacques Rancière, were put forward by Wong to explain this general perception. According to the theories, the “emancipated spectators” were passive that would impose a political analysis of arts. It would eventually cause the trivialization of spectatorship in Hong Kong.

For Rubber Duck, the spectatorship is single, monotonous and passive. It received less critical interpretations though it failed to perform special aesthetic acts. On the other hand, Complex Pile demonstrates new modes of sensible perception yet the spectatorship is conventional and resistant. Wong hence concluded that the theories proposed by Jacques Rancière do explain the phenomenon that Rubber Duck has a higher perceived aesthetic value than Complex Pile.

When addressing the question about the galleries in Central operated by local artists, Wong indicated that art is still a small community in Hong Kong, and the government should put more resources in the field of arts and culture. Yet some audiences commented that art in Hong Kong is growing and artists should not depend too much on the government.

In his presentation, Sam O’Hana read out three poems written by himself. These poems includes “Song of the Visiting Student”, “Khaosan Road’ and “Hong Kong”. The poems reflect some of the significant cultural features of the selected places. “Song of the Visiting Student” is about the reflecting the history of China by visiting the place. “Khaosan Road” presents an aerial view of Bangkok, Thailand’s capital, whereas “Hong Kong” is obviously about the commonly seen characteristics of Hong Kong.

In addressing the question about the term “culture”, O’Hana defined it as a practice or habit of people of a given place. As a foreign student, he also was asked of adopting what strategies to politicize and translate the culture of Hong Kong. He answered that research and observation were the means—by seeing Hong Kong from different angles—to gain a realistic portrayal of the city and make his poetry timeful. 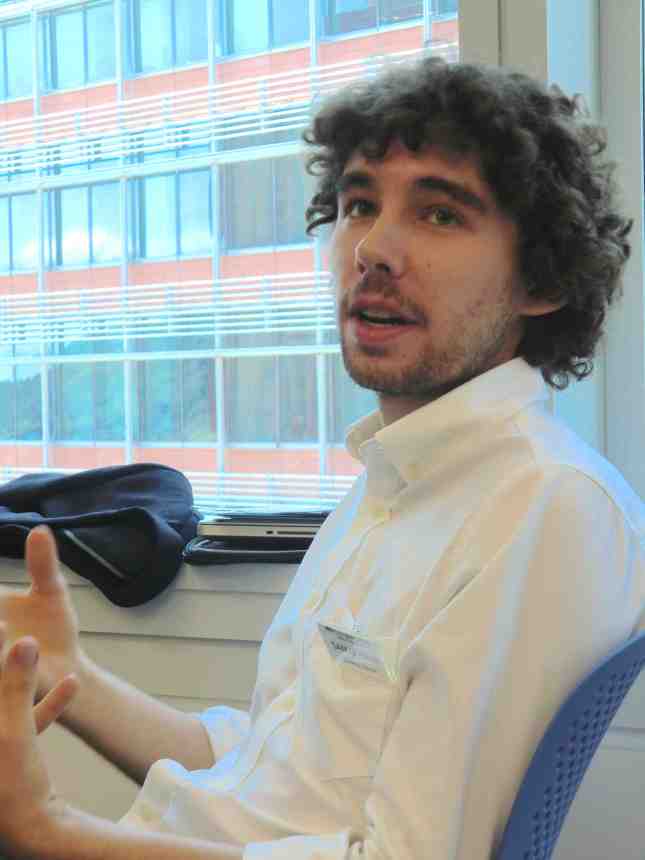 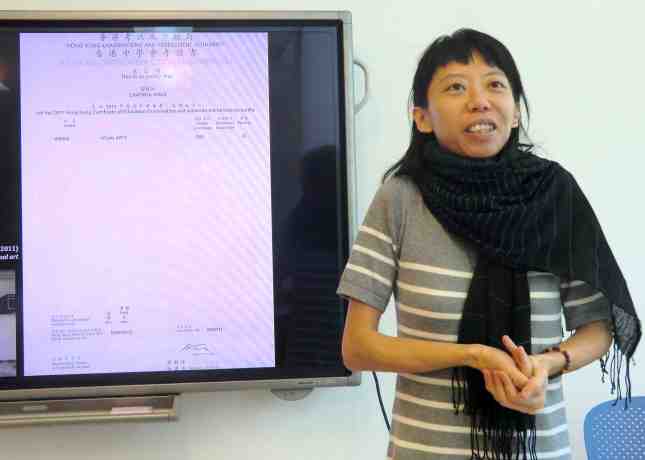 Local artist Wen Yau started her presentation by a famous quotation: “once you enter the public sphere, you can’t avoid to be political”, which is also the theme of her sharing. She pointed out that “personal” can easily go “political” since our essays and speeches are available in the public sphere, which makes it no longer personal. In the sharing, Wen Yau had some of her related works like The personal is political? and I am talking not just about you, but about us presented.

Further, she gave sharing on her experiences of taking the public examinations in previous years. She took the Visual Arts examinations of both the Hong Kong Certificate of Education Examination and the Hong Kong Advanced Level Examination, as well as Liberal Studies of the Hong Kong Diploma of Secondary Education. Unfortunately the results were far from satisfactory. She disappointed of the rigidness of examination format and the educational system in Hong Kong. 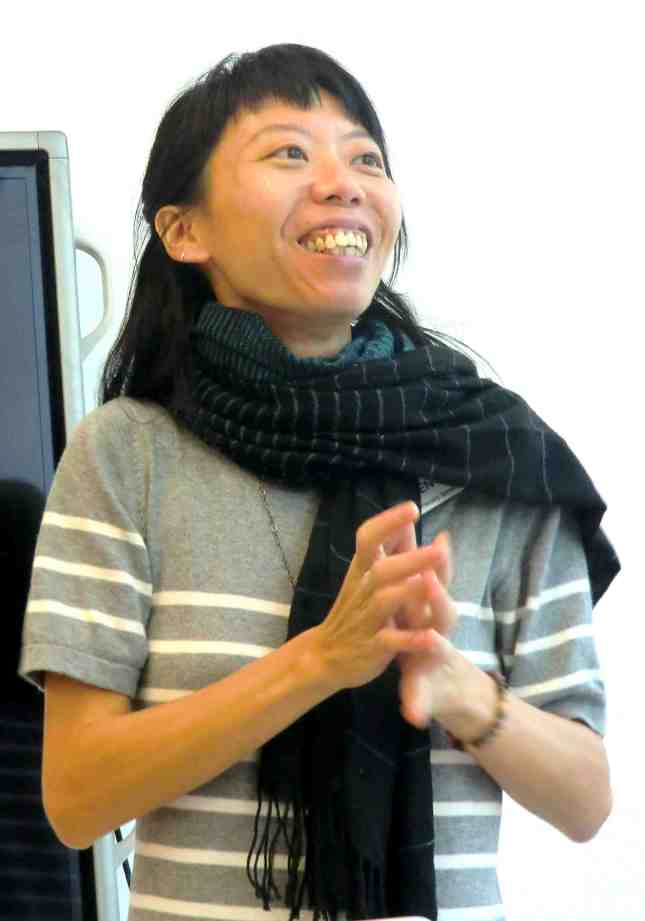 Alfredo Terrado brought attention to the term “creative industry” coined by critical theorist Theodor Adorno. For his own perception, this term could be defined as “the commercial exploitation of creativity”. In his perception, capitalism causes the decline of passion of creative arts, and economic development that would therefore affect ethics and morality.

Terrado highlighted that creativity should be all about aesthetics, the appearance of creative work, instead of commodities. The logic of capitalism should then be equal to the logic of creativity. 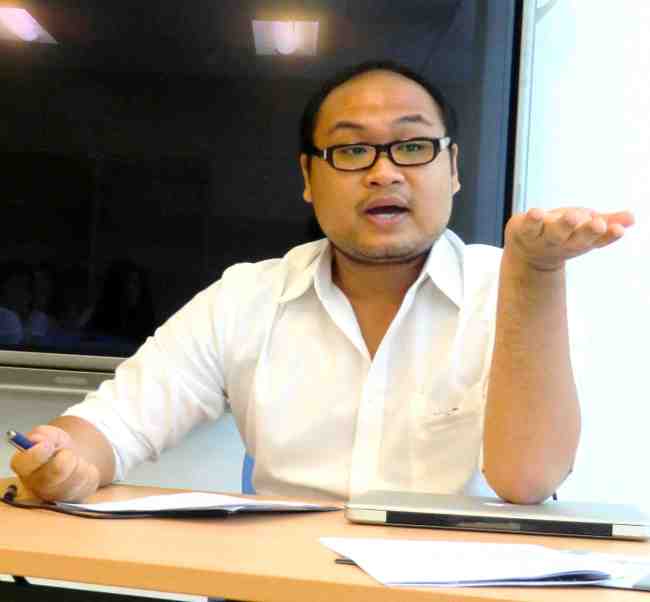 Carman Fung – On “Art” and “Culture”: What Do They Mean in Hong Kong?

Carman Fung explored the definitions of “art” and “culture”, what these terms should be or should do. Throughout her presentation, she provided a comprehensive literature review done by herself on these terms. An array of scholary definitions were put into discussion. She ended up the presentation with her personal definitions. According to her perception, “culture” is the cultivation of minds among people in a given place whereas “art” should be opposed to mechanical production, imagination and creativity. Finally, the goal of art and culture is developing the mental faculties of individuals. 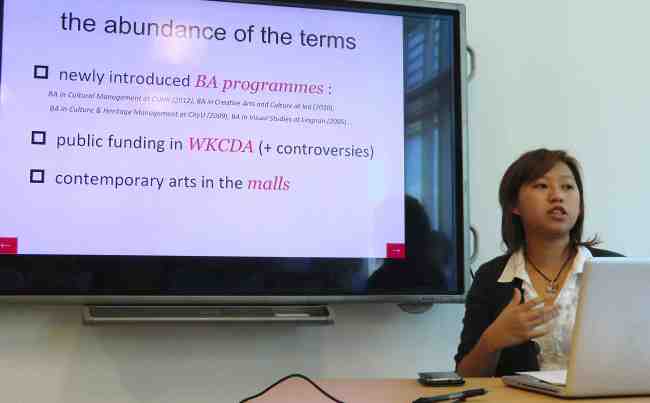 Guillermo Serra gave a presentation of art and creativity in Hong Kong in terms of the film industry. He regarded Hong Kong as a cinema hub as well as an economic hub for cinema. He put forward the media portrayal of Hong Kong by two films: Fallen Angel (1995) directed by Wong Kar-wai and Boarding Gate (2007) shot by Oliver Assayas.

As presented by Serra, Fallen Angel romanticizes Hong Kong by depictions of the city at night with lots of shooting of empty spaces. Boarding Gate, however, does not romanticize Hong Kong but shows the places in the city without stereotypical depictions. It reveals a distinguished shooting towards the same place. 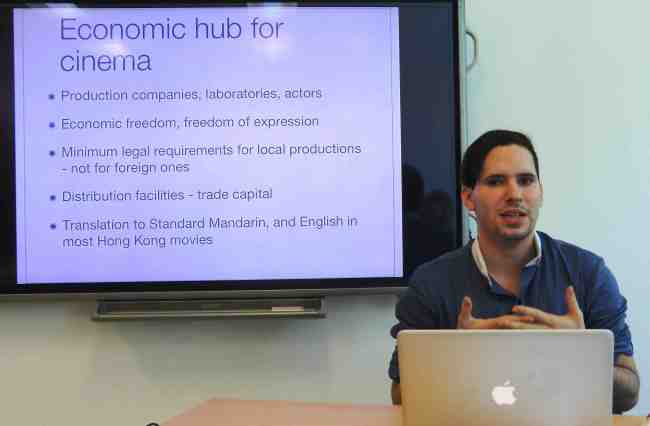 Kuldip Kaur Singh – Tiananmen in the 20th Century: A Dialogue between Architecture and Art

In her presentation, Kuldip Kaur Singh introduced Tiananmen regarding its architecture and art. According to Victory Narrative (1949-1977), Tiananmen is the representation of authority and power. It can be evidenced by the fact that the Great Buildings in China (1959) were all built near Tiananmen.

Singh also called for attention to the propaganda during the Cultural Revolution from 1966 to 1976. The propaganda at that time, such as in the forms of posters and banners, was full of the visual images of Tiananmen, as a place for people to gather.

Kenny Lo- Functional & Beyond Functional – “Airport” as a Critical Discourse

The presentation given by Kenny Lo was about airport in the cultural context. He regarded airport as a “non-place” amid the trend of globalization and indicated that there are two cultural aspects of airport: functional and beyond functional.

Functionally, airport is deemed as “site of transience” as it is never a final destination but only a stopover and a “space of rootlessness” that swallows intimate attachment. It is also “the third space” since the old airport is an awaiting replacement while the new one is the repurposing of facilities.

For the beyond function of airport, Lo named it as “a place of memories” that recollects fragments of memories, as well as “a narrative turn” owing to airport typology and subjective importance. 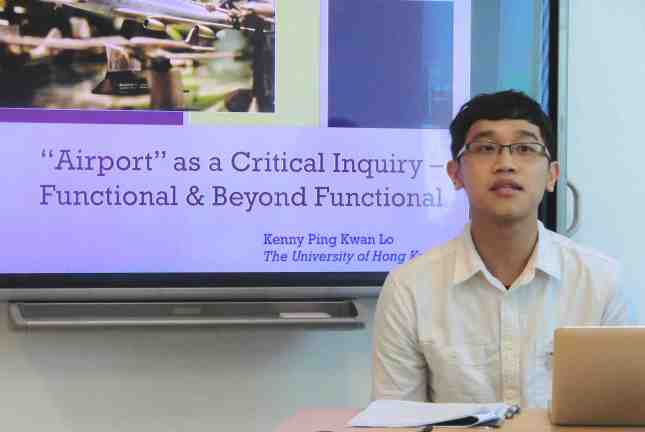 In Samuel Wong’s presentation, the legal perspective of creative arts in Hong Kong was examined. He brought street art in Hong Kong, the busking normally found in Mong Kok and Causeway Bay, into discussion. He noted that street art is a part of life, yet it always unavoidably encounters certain legal constraints.

The prime legal constraint of street art is the problem of licensing such performance on street may violate the “Place for Public Entertainment License”. Wong points out that there is an inadequateness of licensing scheme in Hong Kong. In addition, other constraints of street art performance include creating nuisance, obstructing public place, and even being the violation of “Summary Offences Ordinance” (Cap 228) which is subjected to fine and punishment.

Wong gave several suggestions regarding street art performance at the end of the presentation. Comparing with Taiwan’s street art license system, he proposed the formation of an “Art-friendly” licensing system which allows buskers to apply for performance in an easier way. Government interferences should also be limited. The suggestions aim to complete the constitutional obligation of establishing a culture of creativity. 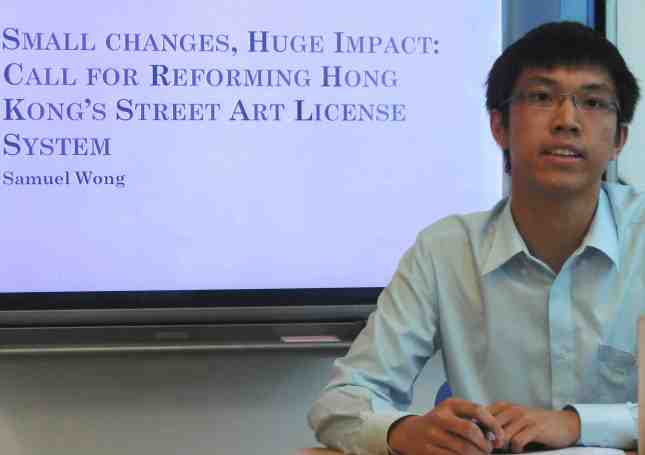 Dear friends of Polis, here is the schedule for tomorrow’s symposium: